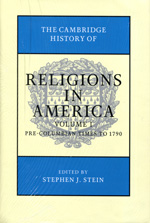 The Cambridge History of Religions in America

The three volumes of The Cambridge History of Religions in America trace the historical development of religious traditions in America, following both their transplantation from other parts of the world and the inauguration of new religious movements on the continent of North America. This history shows complex relationships among these religious communities as well as the growth of distinctive theological ideas and religious practices. The result of this development in North America is a rich religious culture that includes representatives of most of the world's religions. Volume 1 extends chronologically from prehistoric times until 1790, a date linked to the formation of the United States as a nation. Volume 2 focuses on the time period from 1790 until 1945. Volume 3 examines the religious situation in the United States from the end of the Second World War to the second decade of the twenty-first century, contextualized in the larger North American continental context.