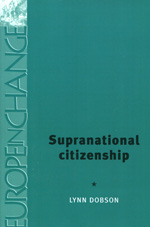 Can we conceive of a citizenship that could, in principle, be relevant to a variety of types of political framework? This book, available at last in paperback, offers a coherent and innovative conception of citizenship that is independent of any specific form of political organisation, and discusses topical issues of European Union - democracy and authority, political community and identity, the supranational constitution - in the light of it. Bringing political theory together with debates in international relations and in citizenship studies, the author argues that citizenship should no longer be understood as a status of privilege and belonging. Instead, it is an institutional role, through which persons might exercise their political agency - their capacities to shape the contexts of their lives and promote the freedom and well-being of themselves and others. In advancing this conception of citizenship, Dobson draws on and develops ideas found in the work of the philosopher Alan Gewirth. Supranational citizenship will be principally of interest to researchers in the fields of European integration, international normative theory, political and moral philosophy, and citizenship.