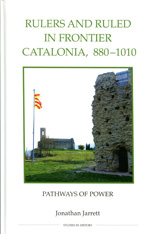 Rulers and ruled in frontier Catalonia, 880-1010
pathways of power

A frontier both between Christianity and Islam and between Francia and the Iberian Peninsula, the region that later became Catalonia was at the heart of the demographic and cultural expansion of the Carolingian empire between the ninth and twelfth centuries. Through the use of charters to generate new ways of looking at medieval history, the author traces previously hidden social networks in this complex and fragmented society; webs of association stretched from counts, the Church and even kings to the ambitious and the locally powerful, the pioneering and the humble, and the standing populations in areas newly brought under government. He builds up a picture of how power was mediated from ruler to subject, and shows how the governing elite mobilised associations and used intermediaries to establish pathways of power, to circumvent their opponents and to secure friendship and mutual cooperation. However, the focus is equally on the smaller histories of the men and women on the land, bringing many ordinary people to life. Dr Jonathan Jarrett is Departmental Lecturer in the University of Oxford and a Career Development Fellow at Queen's College.