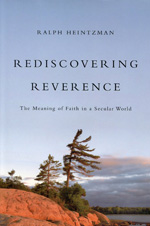 Rediscovering Reverence
the meaning of faith in a secular world

A surprising and insightful work, Rediscovering Reverence offers a rational explanation of what the modern western world calls "religion" and argues that it is not what most people assume. Questioning western culture's evolving use of the word "religion" over the last five centuries, Ralph Heintzman strips away misunderstandings to demonstrate that faith is not the same as belief. He shows how faith is not something one has but something one does, leading the reader to a deeper understanding of religious practice and its necessary place in human life. Drawing on familiar experiences as well as aspects of western and eastern spiritual traditions, Heintzman argues that religious practice is rooted in two basic ways human beings act in the world. It is therefore an element in the structure of the human spirit, not a phase in its history. Explaining the meaning of religious practice in contemporary language, Rediscovering Reverence is addressed to anyone who wants to explore the meaning and promise of a religious life. A unique and thoughtful meditation on the role of reverence in everyday life, Rediscovering Reverence presents new perspectives on modern faith, religion, and both personal and societal well-being.