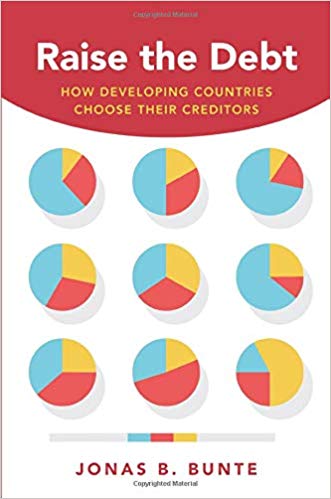 Raise the debt
how developing countries choose their creditors

Credit is the lifeblood of capitalism and development. Brazil, Russia, India, and China-also called BRICs-have become important creditors to developing countries. However, how will their loans affect economic development and democracy in recipient countries? We need to understand why governments accept Chinese over Western loan offers before we can predict their likely consequences. In Raise the Debt, Jonas B. Bunte systematically explains how governments choose among competing loan offers. Using statistical analyses and extensive interview data, he shows that the strings attached to loans vary across creditors. Consequently, one domestic interest group may benefit from Chinese credit but not U.S. loans, while the opposite is the case for other groups. Bunte provides evidence that governments cater to whichever domestic interest group is politically dominant when deciding between competing loan offers. Combining a comparative politics approach with international political economy methods, Raise the Debt shows how a deeper understanding of governments' borrowing decisions is critical for gaining insights into how these loans could impact growth and democracy on a global scale.