Railroading economics
the creation of the free market mythology

Most economic theory assumes a pure capitalism of perfect competition. This book is a penetrating critique of the rhetoric and practice of conventional economic theory. It explores how even in the United States- the most capitalist of countries-the market has always been subject to numerous constraints.Perelman examines the way in which these constraints have been defended by such figures as Henry Ford, J. P. Morgan, and Herbert Hoover, and were indeed essential to the expansion of U.S. capitalism. In the process, he rediscovers the critical element in conservative thought-the "forgotten traditions of railroad economics"-that has been lost in the neoliberal present. This important and original historical reconstruction points the way to a discipline of economics freed from the mythology of the market. 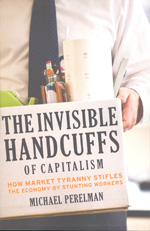 The invisible handcuffs of capitalism