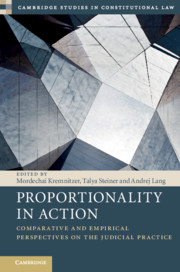 Proportionality in action
comparative and empirical perspectives on the judicial practice

Proportionality in Action presents an empirical and comparative exploration of the proportionality doctrine, based on detailed accounts of the application of the framework by apex courts in six jurisdictions: Germany, Canada, South Africa, Israel, Poland and India. The analysis of each country is written and contextualized by a constitutional scholar from the relevant jurisdiction. Each country analysis draws upon a large sample of case law and employs a mixed methodological approach: an expansive coding scheme allows for quantitative analysis providing comparable and quantifiable measurements, which is enriched by qualitative analysis that engages with the substance of the decisions and captures nuance, contextualizing the data and providing it with meaning. The book concludes with a comparative chapter that synthesizes some of the most interesting findings. Focusing on deviations of the practice of proportionality from theory, the authors conclude their argument in support of an integrated approach to the application of proportionality.