Private and public enterprise in Europe
energy, telecommunications and transport 1830-1990

A comparative history of the economic organisation of energy, telecommunications and transport in Europe in the nineteenth and twentieth centuries. It examines the role that private and public enterprise have played in the construction and operation of the railways, electricity, gas and water supply, tramways, coal, oil and natural gas industries, telegraph, telephone, computer networks and other modern telecommunications. The book begins with the arrival of the railways in the 1830s, charts the development of arms' length regulation, municipalisation and nationalisation, and ends on the eve of privatisation in the 1980s. Robert Millward argues that the role of ideology, especially in the form of debates about socialism and capitalism, has been exaggerated. Instead the driving forces in changes in economic organisation were economic and technological factors and the book traces their influence in shaping the pattern of regulation and ownership of these key sectors of modern economies. 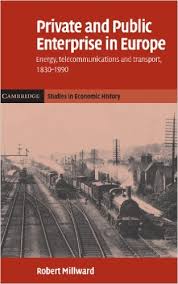 Private and public enterprise in Europe