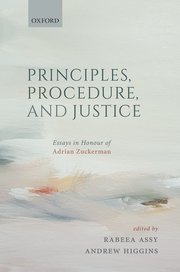 Principles, procedure, and justice
Essays in honour of Adrian Zuckerman

This collection is in honour of Adrian Zuckerman, Emeritus Professor of Civil Procedure at the University of Oxford. Bringing together a distinguished group of judges and academics to reflect on the impact of his work on our understanding of civil procedure and evidence today.

An internationally renowned scholar, Professor Zuckerman has dedicated his professional life to the law of evidence and civil procedure, drawing attention to the principles and policies that shape litigation practice and their wider social impact. His pioneering scholarship is admired by the judiciary and the academy and has influenced several major reforms of the civil justice system including the Woolf Reforms that heralded the introduction of the Civil Procedure Rules, and Lord Justice Jackson's Review of Civil Litigation Costs. His work has also informed law reform bodies and courts in other jurisdictions.

Building upon Professor Zuckerman's work, the contributors address outstanding problems in the field of civil procedure and evidence, and in keeping with Adrian's record of always exploring new areas, the book includes chapters on the prospects for a digital justice system, including the new online court being developed in England and the potential role of algorithms in the court room.

Introduction
1. A Man for All Processes
Samuel Issacharoff

Part II: The Future of Judging
5. How Judges Decide
Robert J Sharpe
6. The Bright but Modest Potential of Algorithms in the Courtroom
Andrew Higgins, Inbar Levy, and Thibaut Lienart 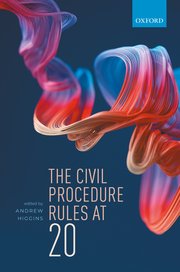 The Civil Procedure Rules at 20