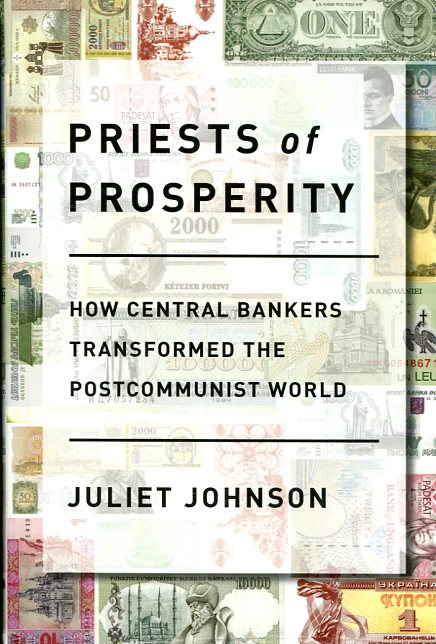 Priests of prosperity
how central bankers transformed the postcommunist world

Priests of Prosperity explores the unsung revolutionary campaign to transform postcommunist central banks from command-economy cash cows into Western-style monetary guardians. Juliet Johnson conducted more than 160 interviews in seventeen countries with central bankers, international assistance providers, policymakers, and private-sector finance professionals over the course of fifteen years. She argues that a powerful transnational central banking community concentrated in Western Europe and North America integrated postcommunist central bankers into its network, shaped their ideas about the role of central banks, and helped them develop modern tools of central banking.
Johnson's detailed comparative studies of central bank development in Hungary, the Czech Republic, Slovakia, Russia, and Kyrgyzstan take readers from the birth of the campaign in the late 1980s to the challenges faced by central bankers after the global financial crisis. As the comfortable certainties of the past collapse around them, today's central bankers in the postcommunist world and beyond find themselves torn between allegiance to their transnational community and its principles on the one hand and their increasingly complex and politicized national roles on the other. Priests of Prosperity will appeal to a diverse audience of scholars in political science, finance, economics, geography, and sociology as well as to central bankers and other policymakers interested in the future of international finance, global governance, and economic development.