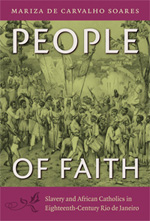 In People of Faith, Mariza de Carvalho Soares reconstructs the everyday lives of Mina slaves transported in the eighteenth century to Rio de Janeiro from the western coast of Africa, particularly from modern-day Benin. She describes a Catholic lay brotherhood formed by the enslaved Mina congregants of a Rio church, and she situates the brotherhood in a panoramic setting encompassing the historical development of the Atlantic slave trade in West Africa and the ethnic composition of Mina slaves in eighteenth-century Rio. Although Africans from the Mina Coast constituted no more than ten percent of the slave population of Rio, they were a strong presence in urban life at the time. Soares analyzes the role that Catholicism, and particularly lay brotherhoods, played in Africans’ construction of identities under slavery in colonial Brazil. As in the rest of the Portuguese empire, black lay brotherhoods in Rio engaged in expressions of imperial pomp through elaborate festivals, processions, and funerals; the election of kings and queens; and the organization of royal courts. Drawing mainly on ecclesiastical documents, Soares reveals the value of church records for historical research.