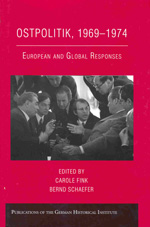 Eds., Carole Fink, Bernd Schaefer Recent studies of the Cold War transcend a narrow focus on four decades of superpower rivalry, recognizing that leaders and governments outside of Washington and Moscow also exerted political, economic, and moral influence well beyond their own borders. One striking example was the Ostpolitik of Chancellor Willy Brandt, which not only redefined Germany#s relation with its Nazi past but also altered the global environment of the Cold War. This book examines the years 1969#1974, when Brandt broke the Cold War stalemate in Europe by assuming responsibility for the crimes of the Third Reich and by formally renouncing several major West German claims, while also launching an assertive policy toward his Communist neighbors and conducting a deft balancing act between East and West. Not everyone then, or now, applauds the ethos and practice of Ostpolitik, but no one can deny its impact on German, European, and world history. # Contribution from 12 authors from 10 countries # Based on newly-opened archival sources # New views on internal/external elements of Cold War history

Defending the rights of others