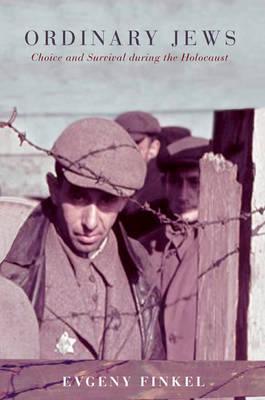 Ordinary jews
choice and survival during the Holocaust

Focusing on the choices and actions of Jews during the Holocaust, Ordinary Jews examines the different patterns of behavior of civilians targeted by mass violence. Relying on rich archival material and hundreds of survivors' testimonies, Evgeny Finkel presents a new framework for understanding the survival strategies in which Jews engaged: cooperation and collaboration, coping and compliance, evasion, and resistance. Finkel compares Jews' behavior in three Jewish ghettos--Minsk, Krakow, and Bia?ystok--and shows that Jews' responses to Nazi genocide varied based on their experiences with prewar policies that either promoted or discouraged their integration into non-Jewish society. Finkel demonstrates that while possible survival strategies were the same for everyone, individuals' choices varied across and within communities. In more cohesive and robust Jewish communities, coping--confronting the danger and trying to survive without leaving--was more organized and successful, while collaboration with the Nazis and attempts to escape the ghetto were minimal. In more heterogeneous Jewish communities, collaboration with the Nazis was more pervasive, while coping was disorganized.