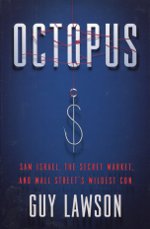 Octopus is a real-life thriller that tells the inside story of an audacious hedge fund fraud and the wild search, by a colorful cast of rogues and schemers, for a “secret market” beneath the financial market we all know.

Sam Israel was a man who seemed to have it all – until the hedge fund he ran, Bayou, imploded and he became the target of a nationwide manhunt. Born into one of America’s most illustrious trading families, Israel was determined to strike out on his own. So after apprenticing with one of the greatest hedge fund traders of the 1980’s, Sam founded his own fund and promised his investors guaranteed profits. With the proprietary computer program he’d created, he claimed to be able to predict the future.

But his future was already beginning to unravel.

After suffering devastating losses and fabricating fake returns, Israel knew it was only a matter of time before his real performance would be discovered, so when a former black-ops intelligence operative told him about a “secret market” run by the Fed, Israel bet his last $150 million on a chance to make billions. Thus began his year-long adventure in “the Upperworld” -- a society populated by clandestine bankers, shady European nobility, and spooks issuing cryptic warnings about a mysterious cabal known as the Octopus.

Whether the “secret market” was real or a con, Israel was all in – and as the pressures mounted and increasingly sinister violence crept into his life, he struggled to break free of the Octopus’ tentacles.