No one would listen
a true financial thriller

Harry Markopolos and his team of financial sleuths discuss first-hand how they cracked the Madoff Ponzi scheme. "No One Would Listen" is the exclusive story of the Harry Markopolos - lead investigation into Bernie Madoff and his $65 billion Ponzi scheme. While a lot has been written about Madoff's scam, few actually know how Markopolos and his team - affectionately called 'The Fox Hounds' by Markopolos himself, uncovered what Madoff was doing years before this financial disaster reached its pinnacle. Unfortunately, no one listened, until the damage of the world's largest financial fraud ever was irreversible. Since that time, Markopolos openly has testified and questioned the enforcement and fraud investigation capabilities of the Securities and Exchange Commission (SEC), shared a sliver of this page-turning story with "60 Minutes", and become perhaps the world's most visible and insightful whistleblower on fraud and conflicts of interest in financial markets. Throughout the book, Markopolos and his Fox Hounds tell their first-hand story of investigating Madoff-with the help of bestselling author David Fisher. They explain how they discovered the fraud, and then how they provided credible and detailed evidence to major newspapers and the Securities and Exchange Commission (SEC) many times between 2000 and 2008, only to have his warnings ignored repeatedly by the SEC. It provides a firsthand account of how Markopolos uncovered Madoff's scam years before it actually fell apart. It discusses how the SEC missed the red flags raised by Markopolos. It describes how Madoff was enabled by investors and fiduciaries alike. This is the only book to tell the story of Madoff's scam and the SEC's failings by those who saw both first hand. Despite repeated written and verbal warnings to the SEC by Harry Markopolos, Bernie Madoff was allowed to continue his operations. "No One Would Listen" paints a vivid portrait of Markopolos and his determined team of financial sleuths, and what 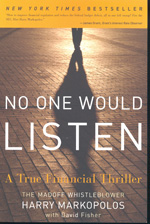 No one would listen