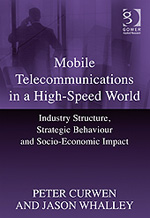 Mobile telecommunications in a high-speed world

"Mobile Telecommunications in a High Speed World" tells the story of 3G and higher-speed mobile communication technologies. Over ten years have passed since the first third-generation (3G) licences were awarded following debates about the merits of auctions versus 'beauty contests' then, nothing much happened. More licences were issued, a few roll-outs commenced and everyone began to think it had all been a horribly expensive mistake. That may still turn out to be the case, but in the meantime there have been massive developments in terms of the number of licences and launches worldwide, in the range of services that can be accessed, in the range of devices that can be used to access them, in operator strategies etc. Even the technology has improved considerably with 4G now under discussion. Much of this story has been chronicled, largely on the Internet, but the information is in tens of thousands of bits and pieces and a large part of it is either misleading or just plain wrong. Here, Peter Curwen and Jason Whalley introduce the outcomes of research that has involved the compilation of a unique database which details every licence and launch worldwide involving 3G. The authors discuss the structure of the industry and the strategic behaviour of operators, as well as the social consequences of the spread of 3G. They examine the role of new entry upon competition, and present analysis of the main operators involved, the development of handsets and especially smartphones. A number of country case studies are included. This comprehensive and up-to-date volume includes a number of country studies and is written by two of the world's foremost researchers on this industry. "Mobile Telecommunications in a High Speed World" will serve the needs of students, academics and those involved, or contemplating involvement, with the telecoms industry. Why pay thousands of dollars to consultancies to separate the wheat from the chaff with respect to 3G when you can read this book.