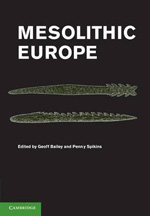 Ed. Geoff Bailey, Penny Spikins. This book focuses on the archaeology of the hunter-gatherer societies that inhabited Europe in the millennia between the Last Ice Age and the spread of agriculture, between ten thousand and five thousand years ago. Traditionally viewed as a period of cultural stagnation, new data now demonstrate that this was a period of radical change and innovation. This was the period that witnessed the colonisation of extensive new territory at high latitudes and high altitudes following postglacial climatic change, the development of seafaring, and the synthesis of the technological, economic, and social capabilities that underpinned the later development of agricultural and urban societies. Providing a pan- European overview, Mesolithic Europe includes up-to-date regional syntheses written by experts in each region as well as a diversity of theoretical perspectives.