Many books on Maimonides have been written and still more will appear. Few present Maimonides, as Menachem Kellner does against the actual religious background that informed his many innovative and influential choices. He not only analyses the thought of the great religious thinker but contextualizes it in terms of the 'proto-kabbalistic' Judaism that preceded him. Kellner shows how the Judaism that Maimonides knew had come to conceptualize the world as an enchanted universe, governed by occult affinities. He shows why Maimonides rejected this and how he went about doing it. Kellner argues that Maimonides' attmepted reformation failed, the clearest proof of that being the success of the kabbalistic counter-reformation which his writings provoked. Kellner shows how Maimonides rethought Judaism in different ways. It is in highlighting this and identifying Maimonides as a religious reformer that this book makes its key contribution. Maimonides created a new Judaism, 'disenchanted', depersonalized, and challenging; a religion that is at the same time elitist and universalist. Kellner's analysis also shows the deep configuration of Judaism in a new light. If, as Moshe Idel says in his Foreword, Maimonides was able to 'reform so many aspects of rabbinic Judaism single-handedly, to enrich it by importing such dramatically different concepts, it shows that the profound structures of this religion are flexible enough to allow the emergence and success of astonishing reforms. The fact that, great as Maimonides was, he did not overcome the traditional forms of proto-kabbalism shows that the dynamic of religion is much more complex than subscribing to authorities, however widely accepted.' 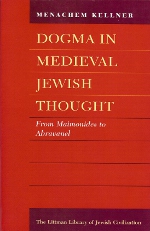 Must a jew believe anything?