Eds. Steven n. Durlauf, Lawrence E. Blume.The New Palgrave Economics Collection Following the publication of the award-winning and much-acclaimed The New Palgrave Dictionary of Economics, Second Edition, which brings together Nobel Prize winners and the brightest young scholars to survey the discipline, a new series of reference books is now available. Each title in The New Palgrave Economics Collection is composed of articles from the Dictionary and covers a fundamental theme within economics. All of the articles have been specially chosen by the editors of the Dictionary, Steven N. Durlauf and Lawrence E. Blume, and are written by leading practitioners in the field. Macroeconometrics and Time Series Analysis Time series methodology represents the language for much of empirical economics. The entries in this volume cover both the mathematical foundations of time series as well as their application in a range of contexts, in particular macroeconomics. The entries reflect both the increasing mathematical sophistication of time series econometrics as well as advances in understanding how these tools can elucidate fundamental economic questions. 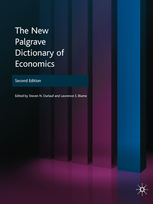 The New Palgrave Dictionary of Economics