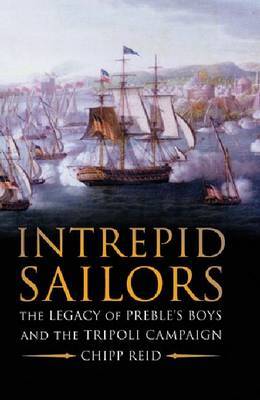 Intrepid sailors
the legacy of Preble's boys and the Tripoli campaign

ntrepid Sailors tells one of the greatest sea stories in the history of the U.S. Navy. Under Commodore Edward Preble, the Navy came of age fighting the scourge of the time, the infamous Barbary Pirates. Intrepid Sailors tells the story of the Navy's campaign to subdue the pirate leader of Tripoli, who declared war on the United States in 1801. After two failed campaigns, Preble took command of the U.S. squadron in the Mediterranean and served notice to world the U.S. Navy would be a force with which to reckon. Among the ships in Preble's flotilla was a non-descript little ketch. Once a French supply boat, the ketch served Tripoli until the U.S. squadron captured her in 1803. Upon her capture, Preble incorporated the little boat into his force, re-naming her the Intrepid. She was the first ship in the United States Navy to bear the name of Intrepid and would play a central role in some of the primary feats of "Preble's Boys." The exploits of the officers and sailors in this campaign are the stuff of legend. In culling myth from fact, Reid went back to original sources, using the words of the men in the campaign to tell their story. Whether it is Decatur leading the daring raid to burn the captured frigate Philadelphia or the escape attempts of American prisoners in Tripoli, Intrepid Sailors brings to life a story many Americans once widely knew but that today has become little more than footnote. Unlike other books on the topic, however, Intrepid Sailors delves into the development of officers and sailors under Preble. Most were half the age of their commander and few had major combat experience. Under Preble, these men forged a legacy of professionalism to which the Navy still adheres. The book also examines one of the most famous friendships in American and Navy history - that of Decatur and Somers. Their thirst for glory and utter devotion to making the U.S. Navy a permanent, respected force inspired all around them but that quest for immortality never caused a breach in their friendship. Instead, that friendship grew stronger, providing even more inspiration. Intrepid Sailors offers a rare insight into the lives of men who today loom larger-than-life and who continue to inspire each new class of naval officer. Stephen Decatur, Richard Somers, Charles Stewart, James Lawrence, Edward Preble and a pantheon of early U.S. Navy heroes all come to life.