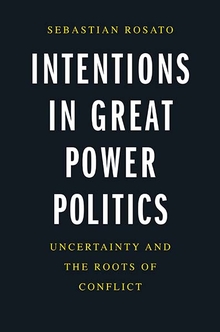 Intentions in great power politics
uncertainty and the roots of conflict

Can great powers be confident that their peers have benign intentions? States that trust each other can live at peace; those that mistrust each other are doomed to compete for arms and allies and may even go to war. Sebastian Rosato explains that states routinely lack the kind of information they need to be convinced that their rivals mean them no harm. Even in cases that supposedly involved mutual trust—Germany and Russia in the Bismarck era; Britain and the United States during the great rapprochement; France and Germany, and Japan and the United States in the early interwar period; and the Soviet Union and United States at the end of the Cold War—the protagonists mistrusted each other and struggled for advantage. Rosato argues that the ramifications of his argument for U.S.–China relations are profound: the future of great power politics is likely to resemble its dismal past.