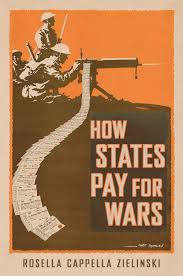 How states pay for wars

Armies fight battles, states fight wars. To focus solely on armies is to neglect the broader story of victory and defeat. Military power stems from an economic base, and without wealth, soldiers cannot be paid, weapons cannot be procured, and food cannot be bought. War finance is among the most consequential decisions any state makes: how a state finances a war affects not only its success on the battlefield but also its economic stability and its leadership tenure. In How States Pay for Wars, Rosella Cappella Zielinski clarifies several critical dynamics lying at the nexus of financial and military policy.

Cappella Zielinski has built a custom database on war funding over the past two centuries, and she combines those data with qualitative analyses of Truman's financing of the Korean War, Johnson’s financing of the Vietnam War, British financing of World War II and the Crimean War, and Russian and Japanese financing of the Russo-Japanese War. She argues that leaders who attempt to maximize their power at home, and state power abroad, are in a constant balancing act as they try to win wars while remaining in office. As a result of political risks, they prefer war finance policies that meet the needs of the war effort within the constraints of the capacity of the state.