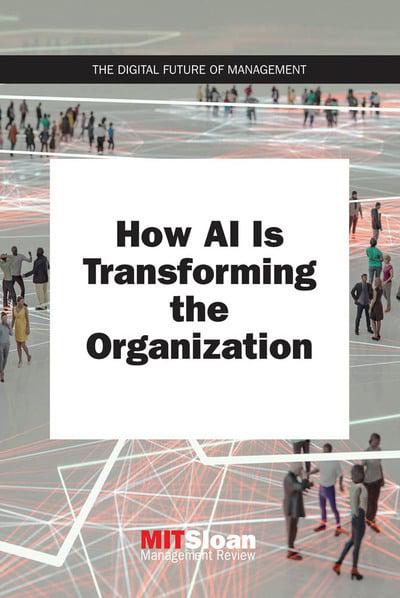 How AI is transforming the organization

A clear-eyed look at how AI can complement (rather than eliminate) human jobs, with real-world examples from companies that range from Netflix to Walmart.

Descriptions of AI's possible effects on businesses and their employees cycle between utopian hype and alarmist doomsaying. This book from MIT Sloan Management Review avoids both these extremes, providing instead a clear-eyed look at how AI can complement (rather than eliminate) human jobs, with real-world examples from companies that range from Netflix to Walmart. The contributors show that organizations can create business value with AI by cooperating with it rather than relinquishing control to it. The smartest companies know that they don't need AI that mimics humans because they already have access to resources with human capability-actual humans.

The book acknowledges the prominent role of such leading technology companies as Facebook, Apple, Amazon, Netflix, and Google in applying AI to their businesses, but it goes beyond the FAANG cohort to look at AI applications in many nontechnology companies, including DHL and Fidelity. The chapters address such topics as retraining workers (who may be more ready for change than their companies are); the importance of motivated and knowledgeable leaders; the danger that AI will entrench less-than-ideal legacy processes; ways that AI could promote gender equality and diversity; AI and the global loneliness epidemic; and the benefits of robot-human collaboration.