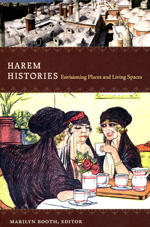 Ed. Marilyn Booth. Harem Histories is an interdisciplinary collection of essays exploring the harem as it was imagined, represented, and experienced in Middle Eastern and North African societies, while also attending to its representational and political uses by visitors to those societies. One theme that threads through the collection is the intimate interrelatedness of West and East through encounters in and around the harem, whether in the elite socializing of pre-colonial Tunis or in popular historical novels published in Istanbul and Cairo from the late nineteenth century onward. Several of the contributors focus on European culture as a repository of harem representations, but most of them tackle indigenous representations of home spaces and their significance for how the bodies of men and women, and girls and boys, were distributed in social space, from early Islamic Mecca to early twentieth-century Cairo.