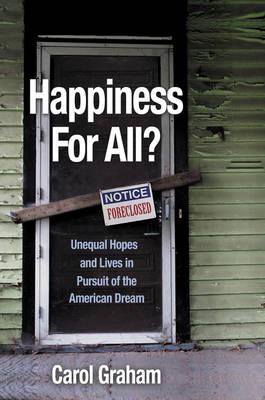 Hapiness for all?
unequal hopes and lives in pursuit of the american dream

The Declaration of Independence states that all people are endowed with certain unalienable rights, and that among these is the pursuit of happiness. But is happiness available equally to everyone in America today? How about elsewhere in the world? Carol Graham draws on cutting-edge research linking income inequality with well-being to show how the widening prosperity gap has led to rising inequality in people's beliefs, hopes, and aspirations. For the United States and other developed countries, the high costs of being poor are most evident not in material deprivation but rather in stress, insecurity, and lack of hope. The result is an optimism gap between rich and poor that, if left unchecked, could lead to an increasingly divided society. Graham reveals how people who do not believe in their own futures are unlikely to invest in them, and how the consequences can range from job instability and poor education to greater mortality rates, failed marriages, and higher rates of incarceration.

Happiness around the world