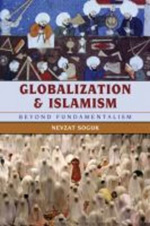 Globalization and islamism
beyond fundamentalism

Tensions between the West and the Islamic world have reached an all- time high, fuelled by caricatures and misunderstandings on both sides. In contrast, as Nevzat Soguk shows, actual histories reveal profound connections across Islamic and Western civilizations. Moving beyond the usual focus on Wahhabi fundamentalism, Soguk highlights the often- overlooked non-Arab forms of Islam in Turkey and in Indonesia, which holds the world's largest population of Muslims. He argues that Westerners tend to see only an extremist form of Islam, which obscures the political and cultural pluralism supported within majority-Islamic countries around the world. This book taps into the nexus of tension born of the fear and terror engendered by Wahabi movements on one hand and the promise of a tolerant, pluralist Islamic religiosity in Turkey and Indonesia on the other. It examines the multiple historical political and religious legacies in Turkey and Indonesia in light of the rapid globalization they are experiencing. By focusing on these two countries, the author fills a significant void on the diverse role Islam is poised to play in shaping regional and global political futures. Original, timely, and humane, this book will be essential reading for all those concerned about repairing Western-Islamic relations.