GOP 3 offers preliminary excavation results from the 2006-2007 season at the Heit el-Ghurab (HeG) site of Giza and from clearing and mapping at the Khentkawes Town site. The volume includes the results of a ground-penetrating radar study by Glen Dash in the areas around the Valley Temples of Menkaure and Khafre, as well as near the Khentkawes Town. Mark Lehner's "Capital Zone" article discusses the geomorphological history of the Heit el-Ghurab site and the Khentkawes Town at Giza as it relates to observations and conclusions about the flood plain and Nile flood levels, with an overall emphasis on the Old Kingdom, at Dahshur, in the Memphis/Saqqara area, near Giza and in the region of Ausim and Abu Roash. Bunbury, Lutley, and Graham offer an overall view of Giza's geomorphology, and Yukinori Kawae summarizes the 2006 three-dimensional laser scanning of the Khentkawes monument. 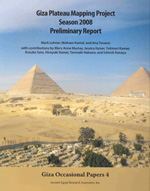