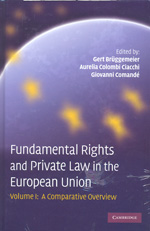 Fundamental Rights and private Law in the European Union

Eds. Gert Brüggemeier, Aurelia Colombi Ciacchi, Giovanni Comandé. This two-volume comparative study, carried out by the Research Training Network on Fundamental Rights and Private Law in the European Union, offers an overview of the doctrines and case law on the direct or indirect application of a fundamental right, for example a national constitutional right or an international human right, in order to solve a dispute between private parties in England, France, Germany, Italy, the Netherlands, Poland, Portugal, Spain and Sweden. Volume I contains national reports for each country, preceded by a brief introduction explaining the project terminology and methodology and followed by a comparative chapter. A contribution on the horizontal effect of fundamental rights and freedoms in EU law is also included. Volume II includes ten comparative analyses of selected case patterns in contract, tort, property and family law, which have been adjudicated with reference to fundamental rights in many or at least some of these countries.