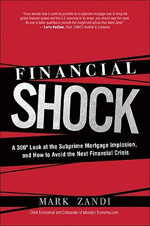 Financial shock
a 360º look at the subprime mortgage implosion, and how to avoid the next financial crisis

"The obvious place to start is the financial crisis and the clearest guide to it that I've read is Financial Shock by Mark Zandi...it is an impressively lucid guide to the big issues." --The New York Times "In Financial Shock, Mr. Zandi provides a concise and lucid account of the economic, political and regulatory forces behind this binge." --The Wall Street Journal "Aggressive builders, greedy lenders, optimistic home buyers: Zandi succinctly dissects the mortgage mess from start to (one hopes) finish." --U.S. News and World Report "A more detailed look at the crisis comes from economist Mark Zandi, co-founder of Moody's Economy.com. His "Financial Shock" delves deeply into the history of the mortgage market, the bad loans, the globalization of trashy subprime paper and how homebuilders ran amok. Zandi's analysis is eye- opening...he paints an impressive, more nuanced picture." --Kiplinger's Personal Finance Magazine "If you wonder how it could be possible for a subprime mortgage loan to bring the global financial system and the U.S. economy to its knees, you should read this book. No one is better qualified to provide this insight and advice than Mark Zandi." --Larry Kudlow, Host, CNBC's Kudlow & Company "Every once in a while a book comes along that's so important, it commands recognition. This is one of them. Zandi provides a rilliant blow-by-blow account of how greed, stupidity, and recklessness brought the first major economic crises of the 21st entury and the most serious since the Great Depression." -- Bernard Baumohl,Managing Director, The Economic Outlook Group and best- selling author, The Secrets of Economic Indicators "Throughout the financial crisis Mark Zandi has played two important roles. He has insightfully analyzed its causes and thoughtfully recommended steps to alleviate it. This book continues those tasks and adds a third-- providing a comprehensive and comprehensible explanation of the issues that is accessible to the general public and extrem