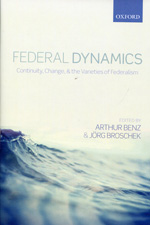 Federal dynamics
continuity, change, and the varieties of federalism

Federal systems are praised for creating political stability, but they are also blamed for causing rigidity. They are said to balance powers, but apparently they are also threatened by instability due to drifts in power. Federalism should support democratization, but it can also constrain the power of the demos and strengthen the executive. In short, there is widespread agreement that federal systems are dynamic. The forces, mechanisms and consequences of federal dynamics, however, are not sufficiently understood so far. This book brings together leading experts in the field of comparative federalism to highlight how the interplay of continuity and change systematically generates and reinforces varieties of federalism and varieties of federal dynamics. Federal Dynamics: Continuity, Change and Varieties of Federalism investigates mechanisms and resulting patterns of federal development. It offers new analytical concepts and discusses different theoretical propositions to systematically compare convergent and divergent trends in federal systems. Acknowledging the theoretical pluralism that dominates the field, the book is organized around four sections: Models, Varieties and Dimensions of Federalism; Timing, Sequencing and Historical Evolution; Social Change and Political Structuring; and Actors, Institutions and Internal Dynamics. The contributions to this volume are variously concerned with three guiding questions: What changes within federal systems, how and why? The focus provided by these three guiding questions allows for a dialogue between strands of the literature that have not talked to each other in a sufficient manner. In this way, the book makes a significant contribution to the growing literature on continuity and change in federal systems. Ultimately, it represents a substantive effort in advancing research on comparative federalism. 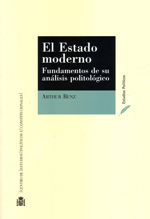 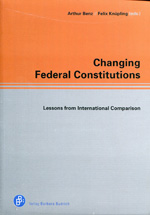