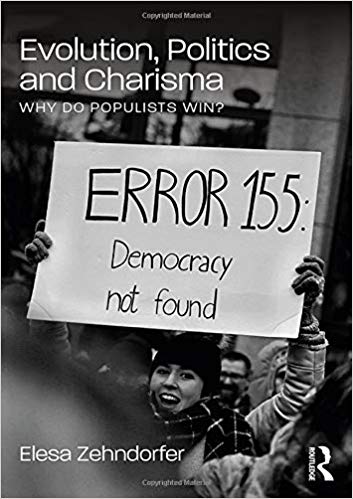 Evolution, politics and charisma
why do populists win?

Evolution, Politics and Charisma: Why do Populists Win? shines compelling new light on the way in which the systematic targeting and manipulation of human physiology remain a cornerstone of all populist political campaigns. Readers wishing to make sense of the populist juggernauts of Trump and Brexit and of the cyclical and formulaic nature of the rise and fall of charismatic populism will find this book particularly appealing.

Elesa Zehndorfer begins by presenting a highly applied explanation of the critical importance of political physiology, physiology theory, neuroscience and evolutionary biology in populist charismatic politics. She later eloquently explains how manipulation of physiological variables (such as heightened testosterone and dopamine) renders the political rally one of the most powerful weapons in a populist leaders’ campaign. Weber’s seminal conceptualisation of charisma ‘in statu nascendi’ and Hyman Minsky’s insightful theories of cyclical boom-and-bust scenarios are then juxtaposed alongside physiological theory to greatly amplify our understanding of the powerful biological antecedents of charismatic populism. These theoretical observations are then applied directly to recent high-profile populist campaigns – including the 2016 Trump Presidential campaign and early Presidency – and the Brexit referendum, to elucidating and compelling effect.

Ultimately, Evolution, Politics and Charisma paints a clear evolutionary picture of the way in which politics is an emotional – not a rational – process, where our emotions are continually targeted to great, and strategic, effect, and where the most recent intersection of technology and physiology has driven the greatest surge in populism ever seen across the Western hemisphere since the 1930’s. Acknowledging this reality opens up exciting vistas in our understanding of the true power of charismatic populism and provides answers as to how its seductive and often dangerous power can be effectively resisted.