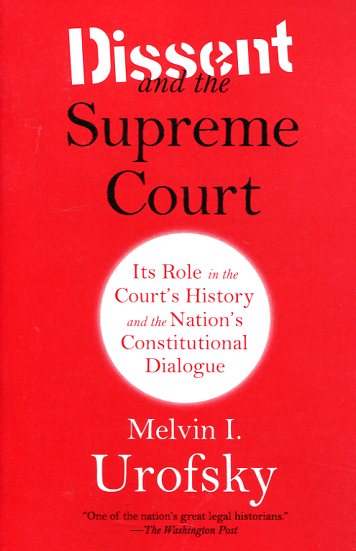 In his major work, acclaimed historian and judicial authority Melvin Urofsky examines the great dissents throughout the Court’s long history. Constitutional dialogue is one of the ways in which we as a people reinvent and reinvigorate our democratic society. The Supreme Court has interpreted the meaning of the Constitution, acknowledged that the Court’s majority opinions have not always been right, and initiated a critical discourse about what a particular decision should mean and fashioning subsequent decisions—largely through the power of dissent.

Urofsky shows how the practice grew slowly but steadily, beginning with the infamous & now overturned case of Dred Scott v. Sanford (1857) during which Chief Justice Roger Taney’s opinion upheld slaver and ending with the present age of incivility, in which reasoned dialogue seems less and less possible. Dissent on the court and off, Urofsky argues in this major work, has been a crucial ingredient in keeping the Constitution alive and must continue to be so.