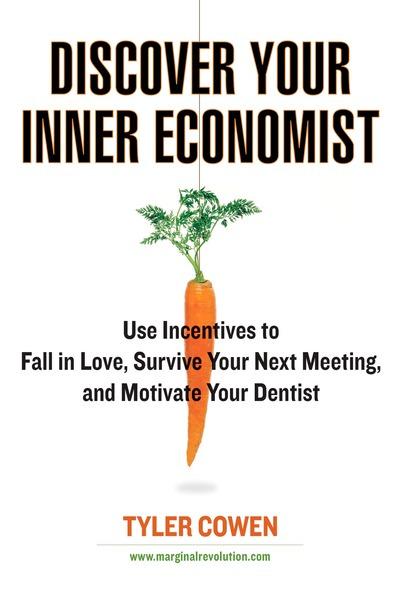 Discover your inner economist
use incentives to fall in love, survive yournNext meeting, and motivate your dentist

One of America's most respected economists presents a quirky, incisive romp through everyday life that reveals how you can turn economic reasoning to your advantage-often when you least expect it to be relevant.

Like no other economist, Tyler Cowen shows how economic notions-such as incentives, signals, and markets-apply far more widely than merely to the decisions of social planners, governments, and big business. What does economic theory say about ordering from a menu? Or attracting the right mate? Or controlling people who talk too much in meetings? Or dealing with your dentist? With a wryly amusing voice, in chapters such as "How to Control the World, The Basics" and "How to Control the World, Knowing When to Stop" Cowen reveals the hidden economic patterns behind everyday situations so you can get more of what you really want.

Readers will also gain less selfish insights into how to be a good partner, neighbor and even citizen of the world. For instance, what is the best way to give to charity? The chapter title "How to Save the World-More Christmas Presents Won't Help" makes a point that is every bit as personal as it is global.

Incentives are at the core of an economic approach to the world, but they don't just come in cash. In fact, money can be a disincentive. Cowen shows why, for example, it doesn't work to pay your kids to do the dishes. Other kinds of incentives-like making sure family members know they will be admired if they respect you-can work. Another non-monetary incentive? Try having everyone stand up in your next meeting if you don't want anyone to drone on. Deeply felt incentives like pride in one's work or a passing smile from a loved one, can be the most powerful of all, even while they operate alongside more mundane rewards such as money and free food.

Discover Your Inner Economist is an introduction to the science of economics that shows it to be built on notions that are already within all of us. While the implications of those ideas lead to Cowen's often counterintuitive advice, their wisdom is presented in ordinary examples taken from home life, work life, and even vacation life. How do you get a good guide in a Moroccan bazaar?