Leading scholars in rational choice analysis present the public choice, new institutionalist, and new political economy perspectives on the political and economic effects of constitutional design and review the accumulating empirical evidence. The variety of constitutional designs found in democratic governments has important effects on policy choices and outcomes. That is the conclusion reached in "Democratic Constitutional Design and Public Policy", in which the constitutional procedures and constraints through which laws and public policies are adopted - election laws, the general architecture of government, the legal system, and methods for amendment and reform - are evaluated for their political and economic effects. Leading scholars, many of them pioneers in the new field of constitutional political economy, survey and extend recent empirical evidence on the policy effects of different constitutional procedures and restraints. Their findings are relevant not only to such dramatic changes as democratic transition throughout the world and the development of a European constitution but also to the continuing process of constitutional reform in established democracies. Using the tools of rational choice analysis, the contributors approach the question of constitutional design from public choice, new institutionalist, and new political economy perspectives. Drawing on empirical evidence largely from the OECD countries, the book analyses such issues as the policy effects of direct (as opposed to representative) democracy, democratic accountability in presidential as compared to parliamentary government, bicameralism and its relation to stable policies, the relative effectiveness of centralised and decentralised governments, the civil and legal regulatory system as a nation's "economic constitution," and the link between constitutional stability and the amendment process. 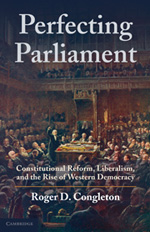