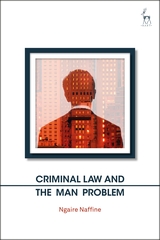 Criminal law and the man problem

Men have always dominated the most basic precepts of the criminal legal world – its norms, its priorities and its character. Men have been the regulators and the regulated: the main subjects and objects of criminal law and by far the more dangerous sex. And yet men, as men, are still hardly talked about as the determining force within criminal law or in its exegesis. This book brings men into sharp focus, as the pervasively powerful interest group, whose wants and preoccupations have shaped the discipline. This constitutes the 'man problem' of criminal law.

This new analysis probes the unacknowledged thinking of generations of influential legal men, which includes the psychological and legal techniques that have obscured the operation of bias, even to the legal experts themselves. It explains how men's interests have influenced the most cherished legal norms, especially the rules of human contact, which were designed to protect men from other men, while specifically securing lawful sexual access to at least one woman. The aim is to test the discipline's broadest commitments to civility, and its trajectory towards the final resolution, when men and women were declared to be equal and equivalent legal persons. In the process it exposes the morally and intellectually limiting consequences of male power.