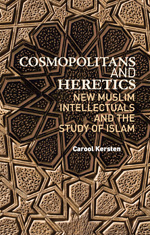 Cosmopolitans and heretics
new muslim intellectuals and the study of Islam

Dramatic political events involving Muslims across the world have put Islam under increased scrutiny. However, the focus of this attention is generally limited to the political realm and often even further confined by constrictive views of Islamism narrowed down to its most extremist exponents. Much less attention is paid to the parallel development of more liberal alternative Islamic discourses. The final decades of the twentieth century have also seen the emergence of a Muslim intelligentsia exploring new and creative ways of engaging with the Islamic heritage. Drawing on advances made in the Western human sciences and understanding Islam in comprehensive terms as a civilisation rather than restricting it to religion in a conventional sense, their ideas often cause controversy, even inviting accusations of heresy.

Cosmopolitans and Heretics examines three of these new Muslim intellectuals who combine a solid grounding in the Islamic tradition with an equally intimate familiarity with the latest achievements of Western scholarship in religion. This cosmopolitan attitude challenges existing stereotypes and makes these thinkers difficult to categorise. Underscoring the global dimensions of new Muslim intellectualism, Kersten analyses contributions to contemporary Islamic thought of the late Nurcholish Madjid, Indonesia’s most prominent public intellectual of recent decades; Hasan Hanafi, one of the leading philosophers in Egypt; and the influential French-Algerian historian of Islam Mohammed Arkoun. This is the first book of its kind and a welcome addition to the intellectual history of the modern Muslim world.