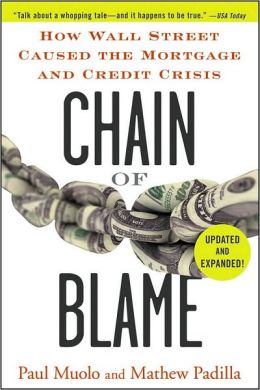 This is an updated and revised look at the truth behind America's housing and mortgage bubbles. In the summer of 2007, the subprime empire that Wall Street had built all came crashing down. On average, fifty lenders a month were going bust-and the people responsible for the crisis included not just unregulated loan brokers and con artists, but also investment bankers and home loan institutions traditionally perceived as completely trustworthy. "Chain of Blame" chronicles this incredible disaster, with a specific focus on the players who participated in such a fundamentally flawed fiasco. In it, authors Paul Muolo and Mathew Padilla reveal the truth behind how this crisis occurred, including what individuals and institutions were doing during this critical time, and who is ultimately responsible for what happened. It discusses the latest revelations in the housing and mortgage crisis, including the SEC's charging of Angelo Mozilo. Two well-regarded financial journalists familiar with the events that have taken place chronicle the crisis in detail, showing what happened as well as what lies ahead. It discusses how the world's largest investment banks, homeowners, lenders, credit rating agencies, underwriters, and investors all became entangled in the subprime mess. Intriguing and informative, "Chain of Blame" is a compelling story of greed and avarice, one in which many are responsible, but few are willing to admit their mistakes. 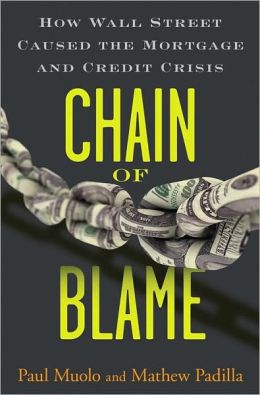