Catholicism, war and the foundation of francoism
the juventud de Acción Popular in Spain, 1931-1939

Spain's first democracy was announced to popular jubilation in April 1931, a new dawn ushered in without a single shot being fired. Yet just over five years later the country was plunged into a brutal civil war that bequeathed hundreds of thousands of deaths and an authoritarian dictatorship under General Francisco Franco that lasted almost forty years. This book analyses Spain's dramatic political shift, reassessing the role of the right as it mobilised against the Second Republic, swinging from ostensibly 'moderate' Catholic conservatism to fascist violence. By providing the first detailed study of the uniformed, paramilitary Juventud de Accion Popular (JAP), Sid Lowe challenges the historiographical orthodoxy on Spanish fascism and assumptions about the role of the hegemonic right-wing party during the Republican years, Jose Maria Gil Robles' CEDA. Drawing on a wide range of previously uncovered primary material, he demonstrates that much of the parliamentary right, its leadership included, abandoned the legal road to power when it could no longer use democracy as a Trojan Horse with which to conquer the state. It throws vital new light on the conspiracy to destroy the Republic, the Nationalist war effort, the creation of the new state, and the true social and political origins of the Franco regime. This work is published in association with the Canada Blanch Centre for Contemporary Spanish Studies. 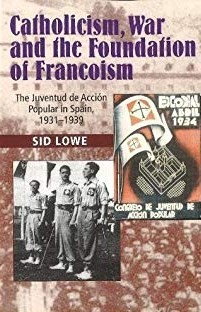 Catholicism, war and the foundation of francoism