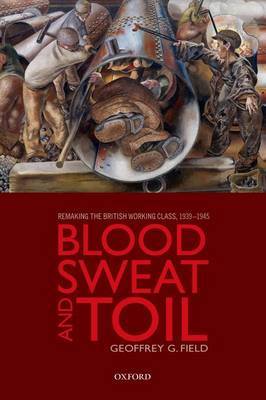 Blood, Sweat, and Toil is the first scholarly history of the British working class in the Second World War. It integrates social, political, and labour history, and reflects the most recent scholarship and debates on social class, gender, and the forging of identities. Geoffrey Field examines the war's impact on workers in the varied contexts of the family, military service, the workplace, local communities, and the nation. Extensively researched, using official documents, diaries and letters, the records of trade unions and numerous other institutions, Blood, Sweat, and Toil traces the rapid growth of trade unionism, joint consultation, and strike actions in the war years. It also analyses the mobilization of women into factories and the uniformed services and the lives of men conscripted into the army, showing how these experiences shaped their aspirations and their social and political attitudes. Previous studies of the Home Front have analysed the lives of civilians, but they have neglected the importance of social class in defining popular experience and its centrality in public attitudes, official policy, and the politics of the war years. Contrary to accounts that view the war as eroding class divisions and creating a new sense of social unity in Britain, Field argues that the 1940s was a crucial decade in which the deeply fragmented working class of the interwar decades was 'remade', achieving new collective status, power, and solidarity. Employing a contingent, non-teleological conception of class identity and indicating the plural and shifting mix of factors that contributed to workers' social consciousness, he criticizes recent revisionist scholarship that has downplayed the significance of class in British society.