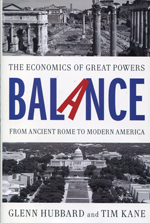 In this groundbreaking book, two economists explain why economic imbalances cause civil collapse— and why the United States could be next.
From the Ming Dynasty to Ottoman Turkey to imperial Spain, the Great Powers of the world emerged as the greatest economic, political, and military forces of their time—only to collapse into rubble and memory. What is at the root of their demise—and how can the United States stop this pattern from happening again?

A quarter century after Paul Kennedy’s The Rise and Fall of the Great Powers, Glenn Hubbard and Tim Kane present a bold, sweeping account of why powerful nations and civilizations break down under the heavy burden of economic imbalance. Introducing a profound new measure of economic power, Balance traces the triumphs and mistakes of imperial Britain, the paradox of superstate California, the long collapse of Rome, and the limits of the Japanese model of growth. Most importantly, Hubbard and Kane compare the twenty-first-century United States to the empires of old and challenge Americans to address the real problems of our country’s dysfunctional fiscal imbalance. If there is not a new economics and politics of balance, they show that there will be an inevitable demise ahead. 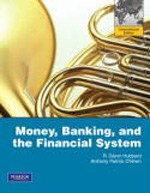 Money, banking, and the financial system