Atlas: Architectures of the 21st Century
Asia and Pacific

THIS ATLAS, devoted to the most recent architecture of Asia and the Pacific, is the first volume in a series of four which develop and update the work published in 2007 by the BBVA Foundation, Atlas. Global Architecture circa 2000. With the same intellectual coordinates as the previous book, which attempted to reflect at the same time the #state of the world# and the #state of the art#, this publication gathers a broad selection of recent works and projects along with ten texts by prominent experts on the different regions of the continent, from Central Asia to Australia, included for convenience in this compilation. The coming years will see the appearance of the second volume of this architectural journey, which will cover America; the third, which will focus on Africa and the Middle East; and the fourth and last, which will complete the itinerary exploring the architectures of Europe and will come to an end at the finis terrae of the Iberian Peninsula. 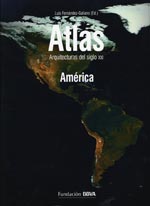