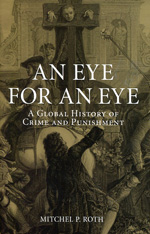 Since the dawn of mankind, humans have demonstrated a remarkable capacity for violence, deceit and mayhem. With the advent of civilization and the creation of laws to uphold our sense of security and retribution, the notions of crime and punishment have come to play significant roles in societies the world over. But how and why do we penalize certain activities over others, and how effective are these penalties in punishing the wrongdoers and bringing a sense of justice to victims? An Eye for an Eye covers everything from petty wrongdoings to sexual offences, serial homicide, piracy and organized crime. Perhaps the most important development in the attempt to safeguard citizens was the birth of the prison and incarceration; today, the philosophy of rehabilitation is gaining increasing momentum. This book also explores execution throughout history, variously considered barbaric or justified by different cultures and societies: punishments such as stoning, hemlock, firing squad and lethal injection can incite abhorrence and support in equal measure. Written by an expert in the field, this book attempts to overcome the lack of historical written documentation, especially in non-Western cultures, by using an interdisciplinary approach that ranges from anthropology and archaeology to folklore, classical literature and oral traditions. It reveals that there is a remarkable continuity throughout history in what crimes are committed as well as the sanctions used to punish them. Perfect for students, academics and general readers alike, this book provides a fascinating insight into criminality and its consequences on a global scale.