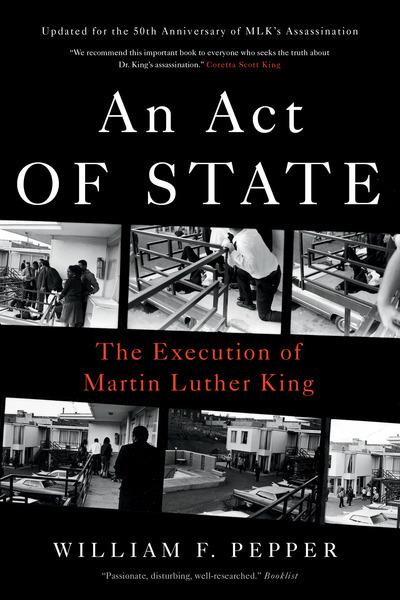 An Act of State
the execution of Martin Luther King

On April 4, 1968, Martin Luther King was in Memphis to support a workers' strike. As night fell, army snipers took up position; military officers surveilled the scene from a nearby roof; and their accomplice, restaurant-owner Loyd Jowers, was ready to remove the murder weapon. When the dust had settled, King had been shot and a cleanup operation was in motion-James Earl Ray was framed, the crime scene was destroyed, and witnesses were killed. It would take William F. Pepper, attorney and friend of King, thirty years to get to the bottom of a conspiracy that changed the course of American history. In 1999, the King family, represented by the author, brought a civil action lawsuit against Loyd Jowers and other co-conspirators. Seventy witnesses set out the details of a plot that involved J. Edgar Hoover and the FBI, Richard Helms and the CIA, the US military, the Memphis police, and organized crime. The jury took an hour to find for the King family.

Now fifty years after MLK's execution, An Act of State demonstrates the bloody depths to which the US government will descend to repress a movement for change.