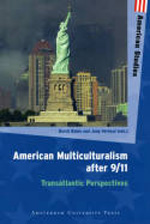 Eds. Derek Rubin, Jaap Verheul. This groundbreaking volume explores the multicultural debate that has evolved in the United States and Europe since the cataclysmic events of 9/11. Instead of suggesting closure by presenting a unified narrative about cultural diversity, national identity, and social stratification, the essays in this well-balanced collection present a variety of perspectives, each highlighting the undiminished relevance of key issues such as immigration, assimilation, and citizenship, while also pointing to unresolved conflicts over universalism, religion, and tolerance. Most importantly, this volume shows that the struggle over multiculturalism is not limited to the political domain, but also has profound cultural implications. American Multiculturalism after 9/11: Transatlantic Perspectives is an invaluable, thought-provoking addition to the debate about multiculturalism as central to the study of the United States in a global context.