Few issues are more central to our present predicaments than the relationship between economics and politics. "After Adam Smith" looks at how politics and political economy were articulated and altered in the century following the publication of Smith's "Wealth of Nations". It considers how grand ideas about the connections between individual liberty, free markets, and social and economic justice sometimes attributed to Smith are as much the product of gradual modifications and changes wrought by later writers. Thomas Robert Malthus, David Ricardo, James Mill, John Stuart Mill, and other liberals, radicals, and reformers had a hand in conceptual transformations that culminated in the advent of neoclassical economics. The population problem, the declining importance of agriculture, the consequences of industrialization, the structural characteristics of civil society, the role of the state in economic affairs, and the possible limits to progress were questions that underwent significant readjustments as the thinkers who confronted them in different times and circumstances reworked the framework of ideas advanced by Smith. By exploring how questions Smith had originally grappled with were recast as the economy and the principles of political economy altered during the nineteenth century, this book demonstrates that we are as much the heirs of later images of Smith as we are of Smith himself. Many writers helped shape different ways of thinking about economics and politics after Adam Smith. By ignoring their interventions we risk misreading our past - and also misusing it - when thinking about the choices at the interface of economics and politics that confront us today. 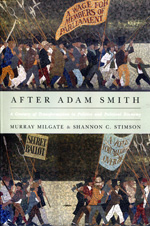 The fall and rise of keynesian economics