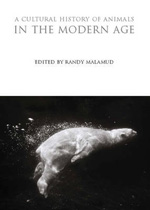 A cultural history of animals in the Modern Age

Ed. Randy Malamud. A Choice Outstanding Academic Title, 2008 Human culture is now more dangerous to non-human animals than ever before. The destruction of natural habitats and the killing of animals for food, science, medicine or trophy - sometimes to the point of extinction - is the stuff of newspaper headlines. We live in a time when the idea of an animal's habitat has almost become irrelevant, except as a historical curiosity, yet also in a time when the public and philosophical acknowledgement of animal rights and environmental ethics is on the rise. Animals are enmeshed in human culture simply because people are so interested in them. Animals remain central to our sense of the natural world. Our pets are often seen as our closest companions through life. At the same time, the last century has seen the use of animals in scientific experimentation and major changes in industrial-scale animal farming. Never has the relationship between human and non-human animals been more hotly contested. As with all the volumes in the illustrated Cultural History of Animals, this volume presents an overview of the period and continues with essays on the position of animals in contemporary symbolism, hunting, domestication, sports and entertainment, science, philosophy, and art. Volume 6 in the Cultural History of Animals edited by Linda Kalof and Brigitte Resl.