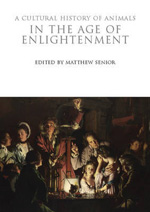 A cultural history of animals in the Age of Enlightement

Ed. Matthew Senior. A Choice Outstanding Academic Title, 2008 The period of the Enlightenment saw great changes in the way animals were seen. The codifying and categorising impulse of the age of reason saw sharp lines drawn between different animal species and between animals and humans. In 1600, "beasts" were still seen as the foils and adversaries of human reason. By 1800, animals had become exemplars of sentiment and compassion, the new standards of truth and morals. A new age had dawned, a time when humans admired animals and sought to recover their own animality. As with all the volumes in the illustrated Cultural History of Animals, this volume presents an overview of the period and continues with essays on the position of animals in contemporary symbolism, hunting, domestication, sports and entertainment, science, philosophy, and art. Volume 4 in the Cultural History of Animals edited by Linda Kalof and Brigitte Resl.