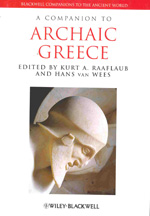 A companion to archaic Greece

Edited by Kurt A. Raaflaub and Hans Van Wees. A systematic survey of archaic Greek society and culture which introduces the reader to a wide range of new approaches to the period. The first comprehensive and accessible survey of developments in the study of archaic Greece Places Greek society of c.750#480 BCE in its chronological and geographical context Gives equal emphasis to established topics such as tyranny and political reform and newer subjects like gender and ethnicity Combines accounts of historical developments with regional surveys of archaeological evidence and in#depth treatments of selected themes Explores the impact of Eastern and other non#Greek cultures in the development of Greece Uses archaeological and literary evidence to reconstruct broad patterns of social and cultural development Recent years have seen powerful developments in the study of archaic Greece, with the emergence of new areas of interest, new ways of thinking about old problems, radical new approaches to the sources, and new evidence. A Companion to Archaic Greece brings together the strands of these developments in a comprehensive survey of one of the most influential periods in Greek history. The archaic age, c.750#480 BCE, witnessed the rise of cities and states, of social and economic structures, political, religious and military institutions and ideas, and cultural expressions which we see today as typically Greek. No less fascinating are the lesser#known institutions and ideas which were characteristically archaic and did not survive into the classical period. In 31 chapters, this Companion systematically covers the literary and archaeological evidence for all regions of the Greek world and all aspects of archaic Greek society and culture, including their Mediterranean context and the impact of non#Greek cultures on their development. It will be a welcome introduction for undergraduate students and an invaluable reference tool for the professional historian.

Edited by Kurt A. Raaflaub and Hans Van Wees

War and peace in the ancient world