We are used to thinking about inequality within countries - about rich Americans versus poor Americans, for instance. But what about inequality between all citizens of the world? "Worlds Apart" addresses just how to measure global inequality among individuals, and shows that inequality is shaped by complex forces often working in different directions. Branko Milanovic, a top World Bank economist, analyzes income distribution worldwide using, for the first time, household survey data from more than 100 countries. He evenhandedly explains the main approaches to the problem, offers a more accurate way of measuring inequality among individuals, and discusses the relevant policies of first-world countries and nongovernmental organizations. Inequality has increased between nations over the last half century (richer countries have generally grown faster than poorer countries). And yet the two most populous nations, China and India, have also grown fast. But over the past two decades inequality within countries has increased. As complex as reconciling these three data trends may be, it is clear: the inequality between the world's individuals is staggering. At the turn of the twenty-first century, the richest 5 percent of people receive one- third of total global income, as much as the poorest 80 percent. While a few poor countries are catching up with the rich world, the differences between the richest and poorest individuals around the globe are huge and likely growing. 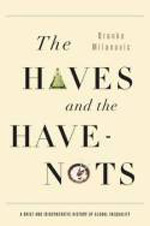 The haves and the have-nots