While the simultaneously creative and destructive forces of modernity in Western Europe have been well studied, the case of Spain has often been overlooked. "Visualizing Spanish Modernity" concentrates on the time period 1868-1939, which marks not only the beginning of the formation of a modern economy and the consolidation of the liberal state, but also the growth of urban centers and spaces made possible by electricity, transportation, mass production and the emergence of an entertainment industry. The authors examine how mass print culture, early cinema, popular drama, photography, fashion, painting, museums and urban planning played a role in the way that Spanish society saw itself and was in turn seen by the rest of the world. Assessing how new cultural forms were instrumental in shaping Spaniards into citizens of the modern world, the authors consider such subjects as the spectacle of the body, notions of race and gender, the changing meanings of time, space and motion, the relationship between technology and everyday life and popular culture. 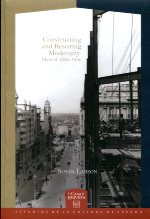